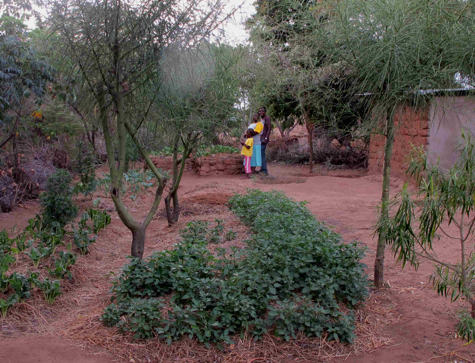 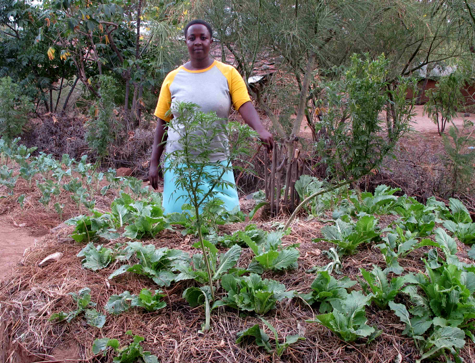 From Longido, Ndoye has three children, two girls and a boy.  She got pregnant while a school student and was married and a first time mother when she was 16 years old, which forced her to cut short her education.  Her husband is part Masai and part Meru, and she is his only wife.

Ndoye stood out in the group that Testigo trained, as the week immediately following her group's training she garnered the help of her mother and sister (not part of our farmer groups) and prepared four double dug beds, a sack garden and a keyhole garden.  The following week she planted kale, nightshade and spinach in each of the double dug beds, and Chinese cabbage in the keyhole and sack gardens.  Since she has added three double dug beds to her garden.  She uses 30 litres of water every two days to maintain these gardens.

Within four months Ndoye was not only feeding her family including her mother and sister's family, but also selling her produce.  She initially gave away her vegetables to her church group as a gift and promotion, but now sells 70% of the vegetables she's growing.  Ndoye sold over 100,000TZS (A$67) worth of vegetables in 2½ months.  She now has regular customers who buy from her – including other local women who buy, then chop and sell for a slightly higher price.

Ndoye is now one of Testigo's permaculture trainers, and has trained Masai in Kimakouwa, Loiborsoit 'A' and Mairowa villages.  She's fluent in Maa and Swahili and also understands English.

From the moment Ndoye started our permaculture training she said that she loved learning and growing.  She started questioning why she and other Longido ladies buy their vegetables from the town of Oldonyosambo (approximately 46 kms from Longido), especially when those vegetables are often grown using chemicals.  She also wanted to prove she can achieve something, and to prove to others in Longido that it is possible to grow vegetables in their dry arid town in the hope that they will also help themselves and copy her example.