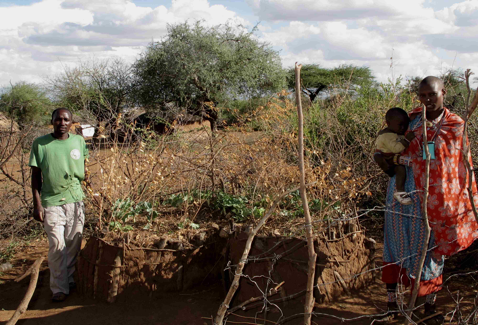 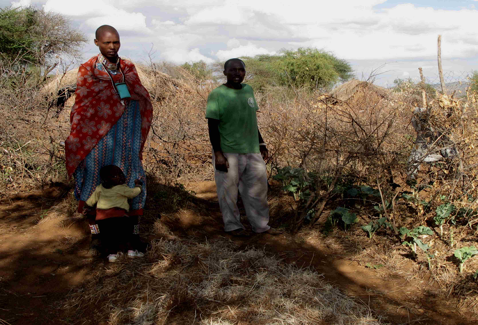 Joseph is a Masai from Longido, with one wife, Maria, they have two girls.  Maria and Joseph are one of a number of married couples who have worked together to establish their first ever gardens.  Although other couples typically divide the duties – with the husbands digging and preparing the plot and the women planting, harvesting, preparing to eat and selling – Maria and Joseph are working equally as a team on many aspects of their garden.

Joseph has been assisting others in his group to prepare double dug beds.  Joseph spent part of his upbringing in Kenya in a village similar to Longido, and witnessed the local Kenyan Masai growing vegetables and progressing through their small produce businesses to buying vehicles to transport their vegetables and affording new houses, so unlike many of our project participants, Joseph already believed in the viability of growing vegetables in such surroundings.  He feels that growing food, becoming self sufficient and self producers is the only way out of poverty.  He is also assisting with the digging of hafirs – household dams, and has worked extensively with our trainer in our primary demonstration plot.  Despite being illiterate like the majority of our participants, he has memorised his training, and is looking to train others in both Longido and in other Masai areas.  Although as a man he's in the minority of our participants (10%), he witnessed both men and women working in agriculture in Kenya and feels that it should be a cooperative effort of both husband and wife/wives.

Joseph collects 20 litres of water a day from the Longido secondary school water outlet, and Maria fetches 60 litres a day from the more distant Orbomba water source using donkeys.  Maria and Joseph are ambitious, and looking to create a large economically rewarding market garden.  They have constructed a keyhole garden growing Chinese cabbage, kale and nightshade, and three double dug beds in which they're growing kale, corn and beans.  They are the first participants of their training group to grow and eat their own produce.  They presently sell less than 10% of their harvest, as they are feeding their extended families with their produce.  They initially sold 14,000 TZS (A$10) worth of vegetables three times, and now go to the market with their produce weekly.  Previously Maria spent 300 TZS a day buying vegetables in Longido town.  Their four year old daughter is particularly pleased with their permaculture plot, and is now asking for ugali (cornmeal) with vegetables rather than with milk.  She's also helping her parents by chasing birds away from the produce, keeping goats out of the plot enclosure and transporting manure from its shady compost pile for use on their gardens.